Media AFI Cotroceni sends you to the Caribbean

AFI Cotroceni sends you to the Caribbean

AFI Cotroceni, in partnership with Forum Film Romania, the distributor of “Pirates of the Caribbean” series, launched the campaign “AFI Cotroceni sends you to the Caribbean”. By being available until May 31st, 2017, the campaign offers shopping enthusiasts the opportunity to enjoy in AFI Cotroceni tens of thousands of items, unique entertainment options in Bucharest and exclusive offer and, furthermore to win prizes amounting to more than RON 15,000.

The mechanism of the campaign is simple: by the end of the month, you buy from AFI Cotroceni at least of RON 200 and you sign up for the raffle, where you can win the big prize: a luxury vacation in the Caribbean, for you and someone you love, to follow together in the footsteps of Jack Sparrow, the main character of the famous cinematic franchise. Furthermore, 50 winners will receive a double invitation to film “Pirates of the Caribbean – Salazar’s Revenge”, which will be released in cinema on May 26th 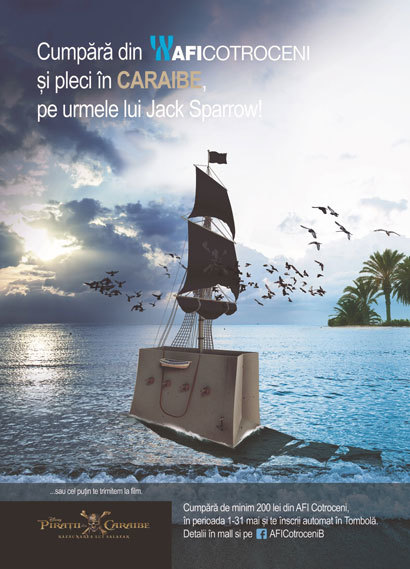